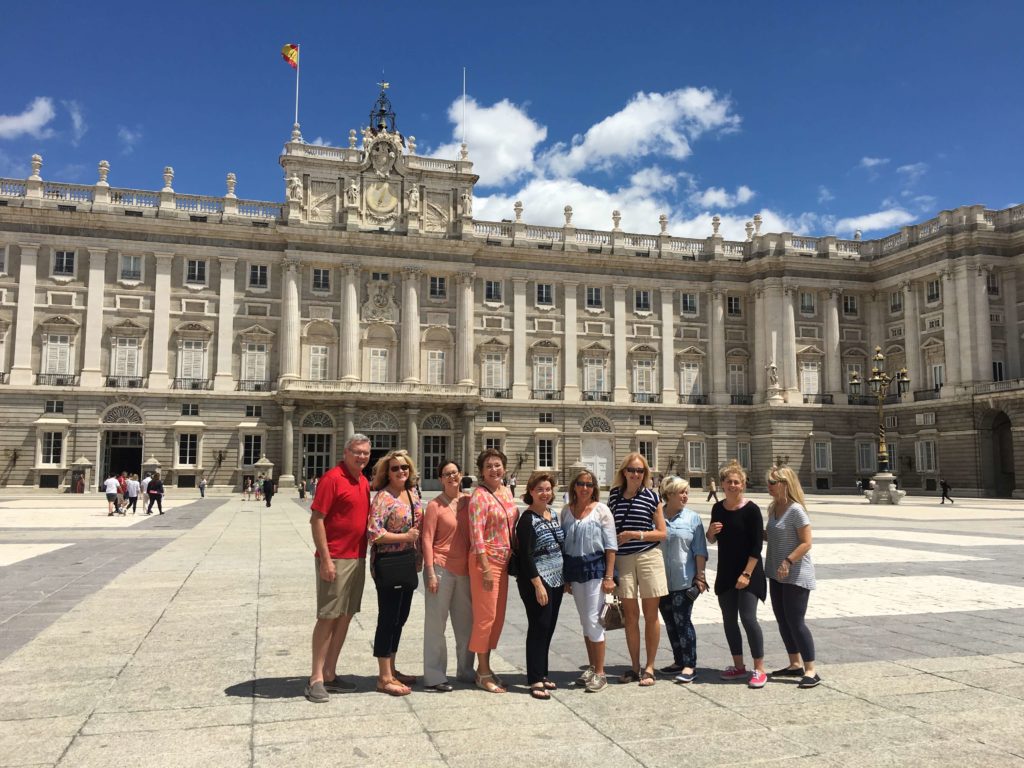 Jose Aznar, a Spanish native, owner of Worlds of Spain, and professor at Vanderbilt led us through beautiful Spain. His enthusiasm and passion for making sure we all fall in love with Spain is obvious. Ask anyone who went on the Spain trip last year! This custom itinerary has been well thought out and planned. We experienced the best of these 2 beautiful countries- many Unesco World Heritage sights, palaces, cathedrals, food, wine, just to mention a few.

A visit to Madrid’s most famous park: El Retiro, where we were able to row and enjoy the landscape in authentic Spanish Style, visit the Royal Palace (the second largest palace in Europe), and have lunch in at the 16th century plaza Mayor.

Travel by AVE (High Speed Train) or bus to the Southern region of Spain:  Andalucia. Our first stop in this fabulous region was Córdoba, were we witnessed some of the best Jewish, Arabic and Christian architecture in Spain. This city greatest glory was when it became the capital of the Moorish Kingdom of El-Andalus until the year 1236, year in which it was reconquered by the Christians. 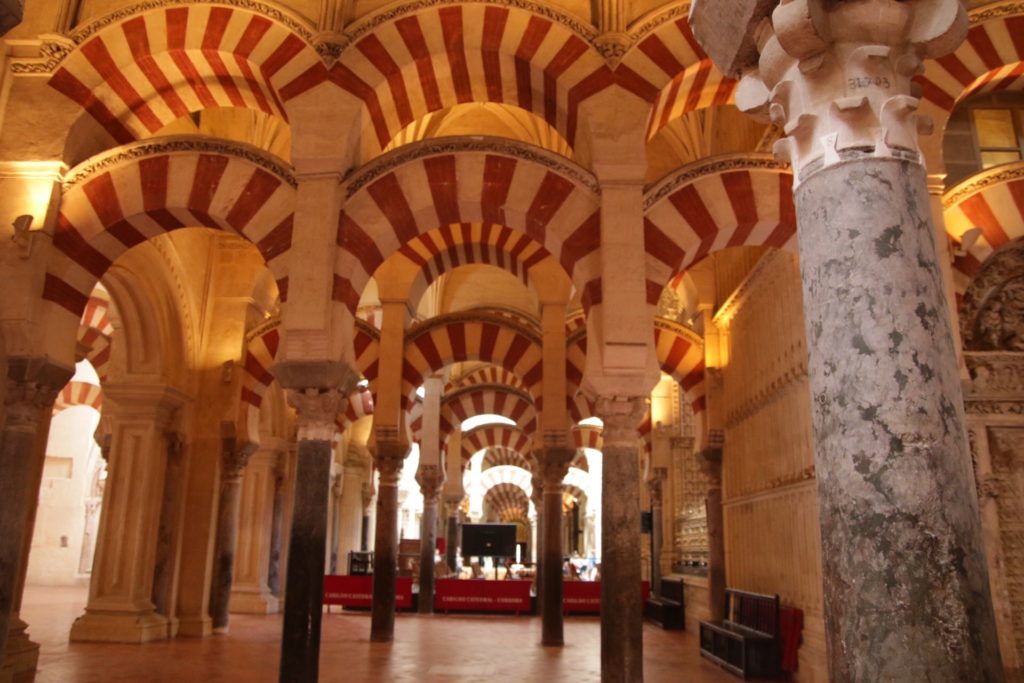 Tour of this fabulous city that captivates many monuments that are worthy of admiration by its visitors: Mosque-Cathedral of Cordoba, The Roman bridge, The Alcazar (fortress built by the Christians in 1328), and the ancient Jewish Synagogue among others. 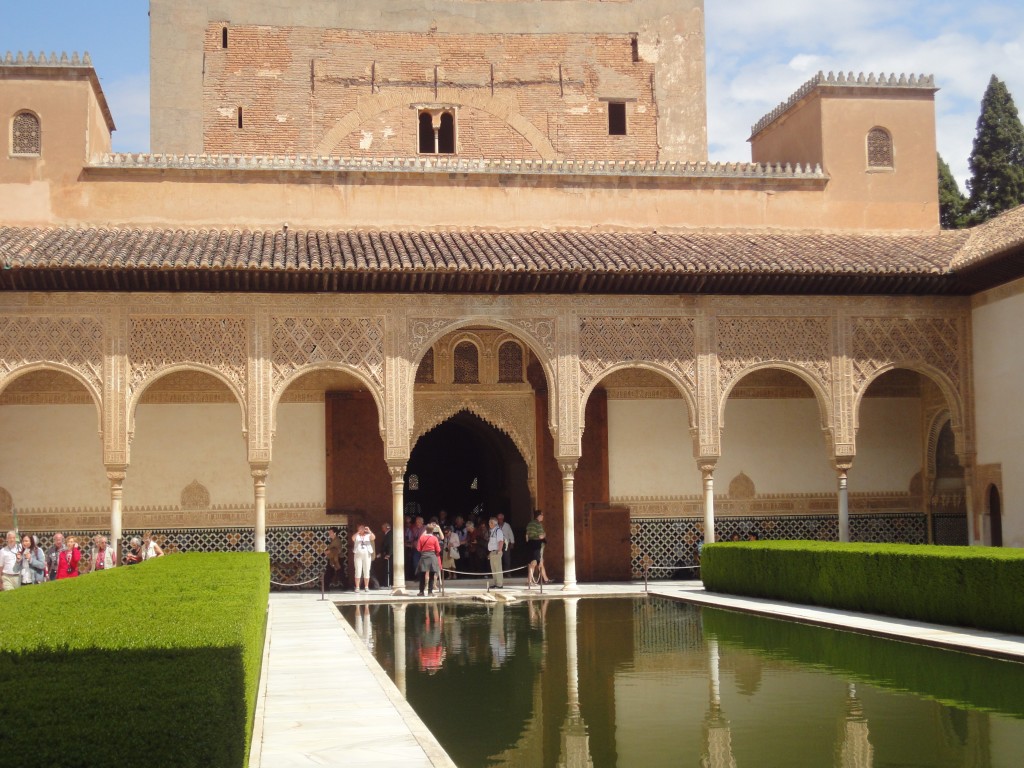 One of the most important and magical cities in the South of Spain: Granada, the group will stop in one of the most recognized Vineyards in Southern Spain: Palacio Quemado, a joint-venture created in 1999 by Bodegas Alvear (founded in 1729) and the Losada Serra family in Extremadura.   In the afternoon, once we arrive to Granada,  we will have a guided tour of the most visited architecture in Spain: La Alhambra (Red Castle). This magnificent Moorish architectural will take you back to the 13th century – the splendor times of the Moorish period in Spain.

One of the jewels cities of Spain: The grandiose city of Seville.

Discover and visit the best attractions in the city such as the Golden Tower, The Palace, the largest Gothic Cathedral in the world, and hear stories and tales about Christopher Columbus prior to his departure to discover the new world.

Évora, amongst several interesting monuments, you shall not miss the Roman Temple from the 1st century, unique of this kind in both Portugal and Spain. This is also the perfect place for a great gastronomic and wine experience, as this is one of the regions in Portugal with more tradition and quality at this level. After this visit, you’ll have a private visit to Quinta Dona Maria a family owned wine estate with regional homemade lunch in the company of the owner at her palace-house!

Located in the city of Estremoz, in the Portuguese region of Alentejo, this palace-like house from the beginning of the 18th century is held as a reference, not only for its beauty but also for its history and quality of its wines. At the end of the visit you will have a very interesting wine tasting.

After crossing Avenida da Liberdade we will be walking through Bairro Alto , one of the most picturesque neighborhoods in Lisbon. In the cosmopolitan Chiado , a commercial and cultural centre, a great variety of shops and cafeterias gather people during the day, while theatres, bars and restaurants are busy in the evening. In front of the historical “A Brasileira” cafe, you’ll pass by the statue of the poet Fernando Pessoa . Right next door you may have a look at “Casa Havanesa” (since 1834), selling the famous Cuban cigars. In this same area you may also have a look at “Livraria Bertrand”, Lisbon’s oldest bookshop. Along this tour, we’ll also get in a wine bar to drink some Portuguese wine . You may also have a look at “A Vida Portuguesa” shop where you can find some of the most representative items of the past century that remained in the memory of the Portuguese (toys, soaps, decorative articles, etc.). Walking down the Chiado section you can have a look at “Luvaria Ulisses”, possibly the smallest and most curious glove shop in the world! Next, you’ll walk down to Rossio Square and Figueira Square and see some of the famous cafes and nice spots. The “Café Nicola” is one of the most ancient cafes, with charm and history. At “Ginginha do Rossio” you’ll try a cup of this sherry liqueur. At Figueira Square we’ll have a look at “Manteigaria Silva”, a very typical grocery, where you can see the typical salted codfish and many Portuguese food articles. Get in “Confeitaria Nacional” and try a bite of the famous “pastel de nata” (custard tartlets). We’ll finalize our tour at “Cervejaria Beira-Gare” to try the Portuguese famous “Bifana” (basically a slice of pork steak in a roll of bread, the pork having been lightly sautéed, sometimes with garlic and/or other spices, so that the meat is warm and juicy) and “pastéis de bacalhau” (codfish cakes) accompanied with beer or “vinho verde” (green wine) and a vegetable soup of the day to finalize.

A private tour that will take you on a full day journey exploring these traditional Portuguese towns. In Sintra , hundreds of years of history and culture await you. Driving around the mountain passing by amazing chalets and aristocratic residences you will reach the 19th century Pena Palace in the most incredible combination of architectural styles, colors and shapes that you will find in Portugal. After browsing through hundreds of years of history it will be time to relax by driving to the town of Cascais The return to Lisbon will follow a very special road named “Marginal” by the Portuguese running always parallel to the white sandy beaches and amazing 17th century fortresses starting at the town of Estoril with its famous casino. At the arrival we will stop at the neighborhood of Belém for a visit of this beautiful area of the city.