We had an amazing trip to Scotland & Wales! Many unique experiences like looking for the Loch Ness monster, bagpipe lessons, spending the night in a castle, and much more! 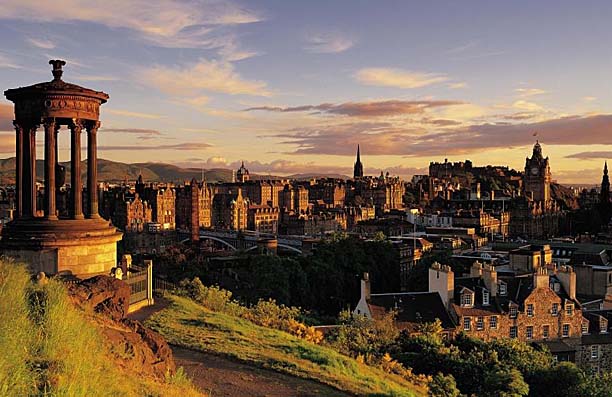 Steeped in history, Edinburgh seamlessly blends old and new, providing visitors with the perfect destination to experience the sights, sounds and tastes of a diverse and vibrant city. Edinburgh has a medieval Old Town and elegant Georgian New Town with gardens and neoclassical buildings. Looming over the city is Edinburgh Castle, home to Scotland’s crown jewels and the Stone of Destiny, used in the coronation of Scottish rulers. Arthur’s Seat is an imposing peak in Holyrood Park with sweeping views, and Calton Hill is topped with monuments and memorials. 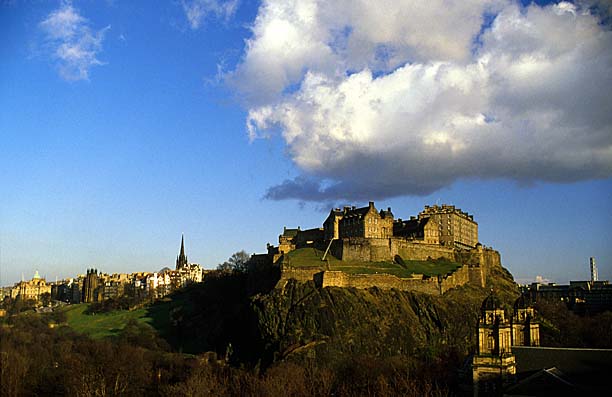 Edinburgh Castle (Castlehill, Royal Mile) ~ this most famous of Scottish castles has a complex building history. The oldest part, St Margaret’s Chapel, dates from the 12th century; the Great Hall was erected by James IV around 1510; the Half Moon Battery by the Regent Morton in the late 16th century; and the Scottish National War Memorial after the First World War. The castle houses the Honours (Crown Jewels) of Scotland, the Stone of Destiny, and the famous 15th century gun Mons Meg, the One O’ Clock Gun and the National War Museum of Scotland. The Crown Jewel shop in the Royal Apartments offers exclusive lines of specially designed jewelry. 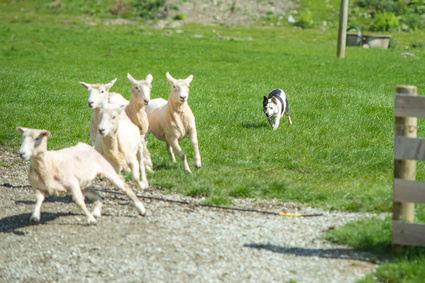 Situated in the very heart of Scotland, Perthshire is perhaps the most scenic of Scottish counties. Most of Perthshire is little more than one hour by road or rail from Glasgow or Edinburgh, but a world apart, with the so-called Fair City of Perth, an attractive county town, and the bustling highland resort of Pitlochry, plus some of the most scenic Scottish glens.

Working Sheepdogs is based on Leault Farm, Kincraig which is only 7 miles from Aviemore at the very heart of the Cairngorms National Park in the Scottish Highlands. During a 45-minute demonstration amidst some of the most beautiful scenery in Scotland, you will see up to eight dogs working as a team maneuvering sheep – and ducks – through various obstacles. 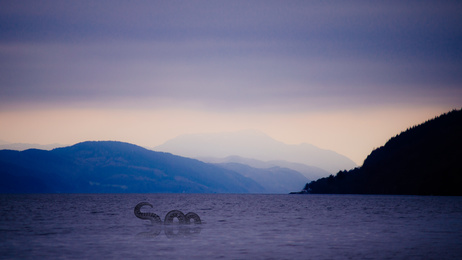 Loch Ness is located in the North of Scotland and is one of a series of interlinked lochs, which run along the Great Glen. The interlinking was completed in the 19th century following the completion of the Caledonian Canal. For many years it has been supposed that there is a large dinosaur-like “monster” resident in Loch Ness. The evidence for its existence is a series of sightings of a plesiosaur-like dinosaur throughout the last 100 years. The case has occasionally been supported by indistinct photographic evidence. Whilst several scientific studies have failed to any presence of such a “monster”, many people believe that the size (21 square miles) and great depth of the loch (almost 800 feet), together with potential underwater caves, gives the monster many places to hide. Regardless of the truth, the suggestion of the Monster’s existence makes Loch Ness one of Scotland’s top tourist attractions.

Glasgow offers a blend of internationally-acclaimed museums and galleries, stunning architecture, vibrant nightlife, fantasticshopping and a diverse array of restaurants and bars. Vibrant and energetic, it enjoys a year-round buzz with an arts scene that regularly produces cutting-edge productions and attracts high-profile exhibitions that led to the city being crowned European City of Culture in 1990.   Glasgow was also the UK’s City of Architecture and Design in 1999 and its architecture is an attraction in itself with countless impressive Victorian structures plus the unique masterpieces of one of the city’s most celebrated sons, the legendary architect and designer, Charles Rennie Mackintosh.

Arran is often described as Scotland in miniature, so visitors who go to Arran on a regular basis (and this includes many from overseas) spend much of their time exploring. Regardless of the island’s size (just 60 miles round) there is always something that you have to put off until next time. Whether it’s to walk along the mountain ridges, play one of the seven golf courses, watch a cricket match, take a tour around one of Arran’s world-renowned visitor attractions or simply sit on a wide sandy beach watching the seals. 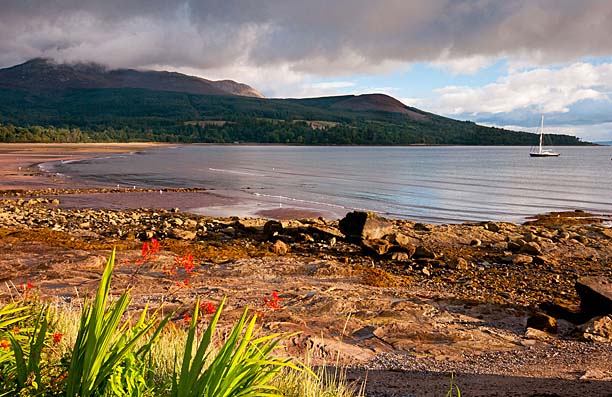 Brodick is viewed as the main village on Arran, although Lamlash is historically the capital of the island. However, Brodick is very much the commercial centre. The beach, a wide sandy strip of ever-changing dunes, stretches across the mouth of Glen Rosa to the imposing Castle (owned by the National Trust for Scotland and a must-see). To the north, the peaks of Cir Mhor and Goatfell offer a wonderful backdrop to the village. These mountains (just less than 900 meters) are popular destinations for walkers and nature lovers of all ages and abilities.

Brodick Castle is both impressive and well-maintained with exotic formal gardens and extensive grounds. Goat Fell in the background and the sea through the trees. Dating from 13th century, it was, until the 1950s, home to the Dukes of Hamilton. 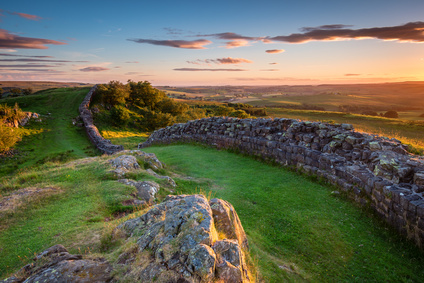 Hadrian’s Wall is a World Heritage Site in the beautiful Northumberland National Park. Popular with walkers along the Hadrian’s Wall Path and Pennine Way

East of Wetheral lies Hadrian’s Wall, now a world heritage site, with a National Trail along its 81 mile length. Given the time constraints, the closest places of interest on the Wall are at Lanercost Priory (east of Brampton). These atmospheric remains of a 12th century Augustinian priory are interesting in themselves, but beyond the Priory are the well-preserved remains of the Banks East Turret and Pike Hill Signal Tower on Hadrian’s Wall. Further on lies Birdoswald Roman Fort (off B6318, 8 mi east of Brampton. The massive stone lower courses of the fort’s eastern gate reveal the strength and permanence of the Emperor Hadrian’s great wall. Built around AD125, Birdoswald Fort covers 5 acres and would have been manned by a garrison of 300 cavalry or 500 foot soldiers. It guards a Roman bridge over the River Irthing, which sweeps round behind it in a deep gorge. 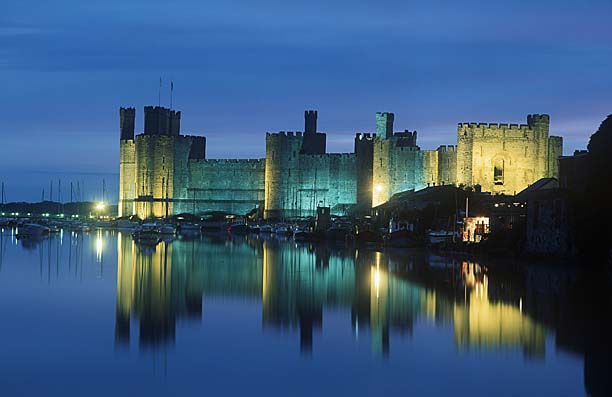 Caernarfon Castle illuminated at dusk, standing at the mouth of the Seiont River at the Southern end of the Menai Strait

Its bewitching beauty and unique atmosphere make Chester very memorable.   Amongst its many attractions, Chester has the most complete city walls, the oldest racecourse, and largest Roman Amphitheatre in Britain, plus a 1000 year old cathedral, 700 year old unique shopping rows and Chester Zoo, the most visited visitor attraction outside of London.

Chester Cathedral (Abbey Square) ~ many things to many people: a vibrant community of worship, an ancient abbey, an archaeological treasure, a cultural hub, a centre for musical excellence and a unique blend of modern and medieval history. There has been a church on this site for over 1000 years, originally a Saxon Minster, then rebuilt as a Benedictine Abbey, this magnificent building is a national treasure.

Conwy Castle ~ Built for Edward I, by Master James of St George, the castle is amongst the finest surviving medieval fortifications in Britain. In a word, exceptional. You can’t fault it, from the grandeur of its high towers and curtain walls to its excellent state of preservation. An estimated £15,000 was spent building the castle, the largest sum Edward spent in such a short time on any of his Welsh castles between 1277 and 1307. Money well spent. 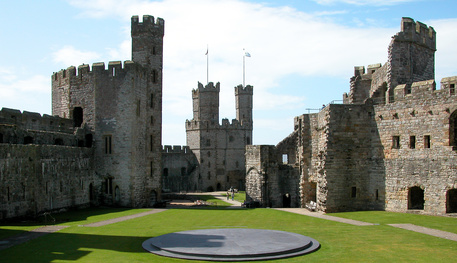 Caernarfon Castle (Caernarfon) ~ A brute of a fortress. Caernarfon Castle’s pumped-up appearance is unashamedly muscle-bound and intimidating. Picking a fight with this massive structure would have been a daunting prospect. By throwing his weight around in stone, King Edward I created what is surely one of the most impressive of Wales’s castles, worthy of World Heritage status.   Most castles are happy with round towers, not Caernarfon! Polygonal towers were the order of the day, with the Eagle Tower being the most impressive of these. You will also note the colour-coded stones carefully arranged in bands. The site of this great castle wasn’t chosen by accident. It had previously been the location of a Norman motte and bailey castle and before that a Roman fort stood nearby. The lure of water and easy access to the sea made the banks of the River Seiont an ideal spot for Edward’s monster in masonry. 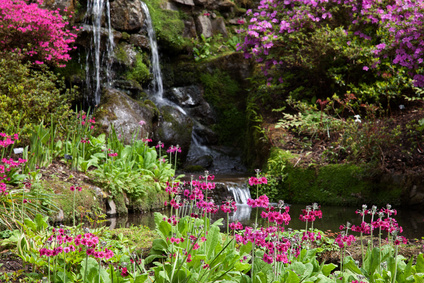 Bodnant Gardens (Glan Conwy) ~ Bodnant Gardens is a world-famous botanical gardens situated in Glan Conwy, North Wales. The garden has been created by five generations of one family and boasts stunning views of the nearby Snowdonia. Home to 18 record-breaking trees, plants from all over the world and its very own waterfall.

What an amazing trip! Please send us an email, join us next time!